Is it okay to apply for jobs outside of your major?

The short answer? Yes! It’s definitely okay. It’s normal too. This blog post is the story of how my friend ended up in a job outside of her major and how even though it’s unrelated to what she studied, it’s still getting her closer to her dream job.

Sophomore year of college, I went on a career trek to New York because I thought that I might move to the Big Apple after college. I remember going on tours of companies that lived on the top floors of skyscrapers, sitting in fancy meeting rooms, and meeting someone in the C-suite of whatever company we were at(they were usually an alum. of my college).

To my surprise, many of these people had a major in college that had nothing to do with their current role:

I remember thinking to myself, “Ya. That’s how things worked out for you. But I’m studying marketing because I want to work at an ad agency.”

Turns out, I’m not the only person who felt pretty defined by the major I studied in college…

When I had a chance to talk with my friend, Aashna, about her job hunting experience after college, she shared with me that she wished that she had opened her mind to jobs outside of her major earlier in her job hunt.

Ready to land your first job out of college?

This Productive Job-Hunting Game Plan will show you the exact steps you need to take to quickly and easily land your first job out of college.

Best of all, it’s completely FREE, but only for a limited time–simply opt in below!

1. What did you get your Bachelor’s Degree in?

I was an International Relations and Political Science double major with a minor in Spanish.

2. During your senior year, how did the thought of graduation and life after college make you feel?

I felt anxious. I began was worried about my career path because I realized that what I studied wasn’t one of those majors where things were more cookie cutter.

If you want to be a doctor, there are set paths for you to follow. This is not to say that everyone who studied those fields has it easier or that everyone follows those exact molds. It’s just to demonstrate that if someone wants to become a doctor, they have to take certain classes as an undergrad. Then take the MCATs and get into med school. Then do a residency program and so on.

Whereas for me, even though I knew I wanted to work for an international organization and start making a difference, I didn’t know how to get there.

3. Can you describe for me the expectations senior-year-you had for life after college? What job were you hoping to get and why? And what was your expected timeline?

I feel silly saying this. But I thought I was going to have a job related to what I studied in college (International Relations and Political Science). And that this job would help me decide what (within the fields I studied) I wanted to do and learn more about. I was mainly looking for an opportunity where I could figure out what I was interested in.

I was also debating whether or not to move abroad and teach English.

My overall expectation was that I would graduate, get a job related to my major, work for a couple of years to figure out my interests, go back to school for whatever I discovered that interest would be, then get a really great job and start making a difference.

I didn’t have a set timeline because I was open to the possibility of things taking longer than my expectations.

4. Did you have anything lined up after college?

I did not. Although I did spend a lot of time during my senior year applying to jobs within my major.

5. What emotions did you experience during your first year out of college while applying to jobs?

Having a part-time retail job helped a lot. It helped keep me positive and create a routine.

During the first month, my mindset was hopeful. I was like “Okay. I have this job so I’m making money. I’m a fresh-out-of-college graduate and I’m applying to jobs. Things are going to work out.”

And then around month two, after facing rejection after rejection, the light at the end of the tunnel started to dim. All of the rejections started to chip away at my confidence. And even though I was receiving positivity from my support network, I felt really down anyway. I was worried that I’d be stuck working retail. Not that there’s anything wrong with that!

It’s just that after I spent four years studying hard and investing a lot of money toward a degree, I expected to be doing something within that degree. I thought, “Well, there goes all of that time and money. I’m not going to achieve what I want to achieve.”

Both the job application process and the length of time it took me to find a job that required a four-year degree made me question myself.

Hint: Get a copy of the Productive Job-Hunting Game Plan so you can get through the job-searching process confidently and quickly.

6. Tell me about your first job (that required a four-year-degree) out of college. And how long did it take you to get that job?

Five months after graduation, I finally got a job (that required a four-year-degree) that allowed me to move out of my parents’ home and live on my own. This job was in a completely different industry and outside of my major—marketing and branding!

7. What were your takeaways during your first year about the expectations senior-year-you had vs. how things played out?

Looking back, I realize that this is somewhat of an unrealistic expectation because you can’t expect things to play out how you planned them to. Granted, I had blips of reality that made me feel okay with things taking me longer than I had hoped. But I still expected to do things related to what I studied.

8. If you could talk to senior-year-you, what would you say to yourself about life after college?

I would tell my-senior-year-self to be more open to opportunities. That just because you study something in college doesn’t mean you have to find a job related to what you studied. That you can be flexible. That you can see what you are interested in and explore it. And that when you define success as finding a job that’s related to the field you study, you can be setting yourself up to miss out on great experiences.

My first “big girl” job out of college was something that was so different from what I studied. It was in marketing and branding. And I’m so grateful for that experience because it was a great baby step toward growing the confidence I needed to eventually live and work abroad! It helped me build back up my self-confidence. Like I mentioned before, applying to jobs the first time around can really knock down the belief you have in yourself.

With this first job (that requires a four-year degree), I was able to prove to myself that I would be okay if I moved abroad to work. And I got to hone in on valuable skills that help me with my current job as a Development Assistant.

Aashna’s post-college journey is still being written. But you got a peek into her first year as a college graduate who was navigating the ups and downs of job hunting.

If you’re someone who’s struggling to find a job within your major, know that this is normal and okay if you end up in a job outside of your major.

P.S. Don’t forget to grab a copy of the Productive Job-Hunting Game Plan so you can quickly and efficiently land that great, first job.

You can check out other post-college journey stories here:

Struggling to land your first job? 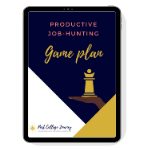 It’s possible you skipped a few steps in the job-hunting process. Get the free productive job-hunting game plan to figure out what you’re missing. 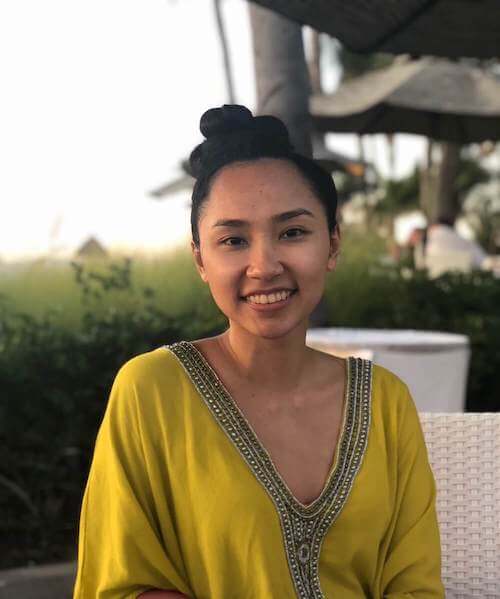